Click to enlarge
Home » Catalogue » This is the Friend of Rome 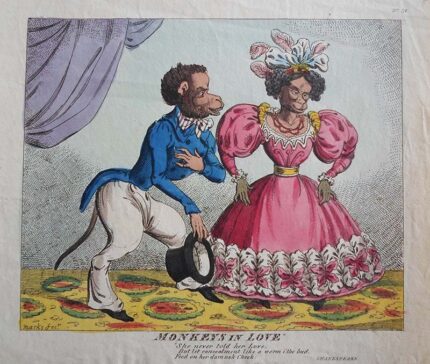 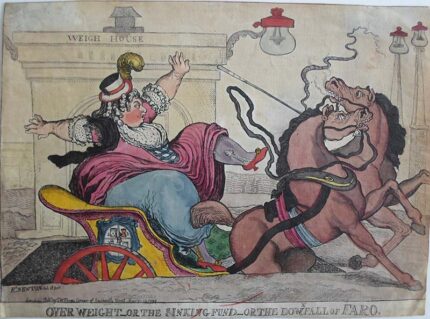 Horne Tooke (left) strains at a rope attached to a chain which links the necks of Hood and Fox, whom he is about to haul up to a gibbet. Hood and Fox stand bound together (right), a chain round their bodies and round a leg of each. Tooke is helped by two men partly visible on the extreme left; he says: “We hope all uninfluenced and Independent Electors will assist our Endeavours to Crush this truly Infamous Coalition to Deprive the Electors of Westminster of their franchises & make it like a Corrupt & Rotten Borough” [cf. BMSat 7652]. Hood says, “Ah! this comes of my Getting into bad Company – Evil Communications Corrupt good manners.” Fox says, “O my Dear Lord I Thought to have sold this City next Election for 100,000, or if I had been nickd in the Intrim, to have left it in my will to Major Hanger or H[ervey] Aston”. An elector, whose profile appears on the lower right. margin of the design, says, “Charly looks D——d Gllum – he is Gallows Poor Else I should have nail’d Five Quid for em”. The gibbet is inscribed: ‘The End of all unnattural & unjust Coalitions’. Above it is a scroll inscribed: ‘Caesar has Friends & Pompey has Friends but Rome has no Friends’. A cherub flying in the air points at Tooke; he holds an open book inscribed: ‘Junius Discovered by P. Thicknesse’.