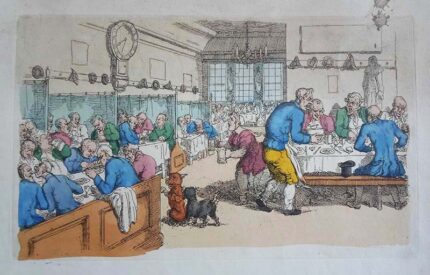 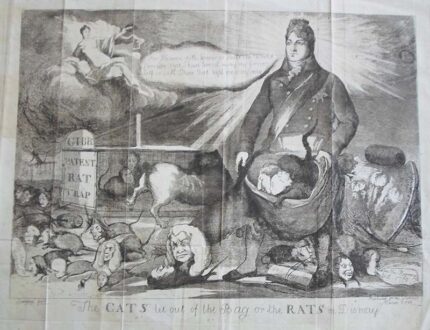 A number of men seated round a circular table over the wine manifesting sleepiness or exhaustion in different ways, while an officer in regimentals harangues them on some campaign. He sits over the table, in profile to the right, gesticulating with outstretched arms over a plan drawn on the table-cloth. Two overturned wine-glasses lie in front of him, two empty bottles stand on the table. On the farther side of the table a man stands up, stretching and yawning violently. His neighbour on his right also yawns; the man on his left supports his head on his hands, scowling at the speaker through half-closed eyes. Next him (right) a man in profile to the left holding a wine-glass yawns widely. Two others in profile to the right are asleep in attitudes of extreme weariness. A very fat man, sitting on the left. I turned away from the table, with outstretched legs in top-boots, yawns violently. From the right enters a servant with tousled hair, wearing a striped jersey; he is bringing in a boot-jack and pair of slippers, he too is yawning violently. In the foreground are two dogs

Be the first to review “A Long Story” Cancel reply