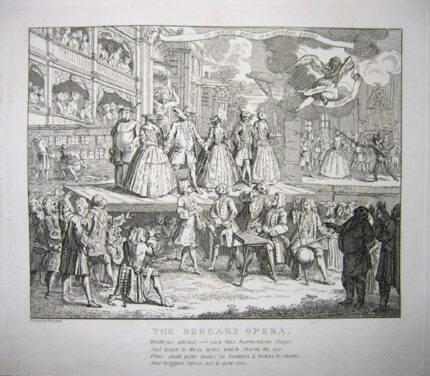 Frontispiece (to Kirby’s Perspective of Arcitecture)

John Joshua Kirby (1716-74), son of a Suffolk historian, had become an authority on perspective upon which he lectured at the St. Martin’s Lane Academy. A friend of Gainsborough and Hogarth, he taught perspective to George III when still Prince of Wales and in 1754 he published a treatise on Dr. Brook Taylor’s Method of Perspective featuring this attractive, delicately finished frontispiece engraved by Woollett after a drawing by Hogarth. In 1768 the pious, earnest Kirby became secretary and subsequently President of the Incorporated Society of Artists, but resigned two years later because of ill health. Kirby is buried at Kew churchyard near his friend Gainsborough. This engraving shows a cherub seated in a pastoral Italianate landscape, reading Palladio’s Architecture and pointing towards a sunbeam, which highlights a small, round, classical temple. In the foreground is an unfinished classical column which resembles a sceptre and represents a new order of architecture. It has a shaft similar to a bundle of fasces and a capital composed of the Star of the Garter, and Prince of Wales’ feathers and coronet. It rests against a plinth with an architectural perspective drawing and cube at the base. In the background is a neat Italian town