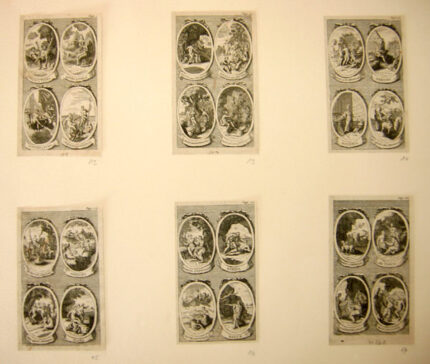 Francesco Bartolozzi after William Hogarth (Paul Sandby)
North & South of Great Britain.
London, June 11th. 1781
Etching.
145 x 170 mm.
£120
A rare print by signed F. B., probably Bartolozzi,
And inscribed Wm. Hogarth delin., but in fact after Paul Sandby.
Two men stand below a signpost from which hangs a sign with a cow inscribed Roast & Boild. The man to the left, from the North, leans against the post, ragged and hungry looking, bending over his clutched hands. In the background a view of a castle on a hill top.
To the right is the Southerner, standing, legs slightly crossed, leaning casually against a low post. He is holding a tankard of London Porter, and looks well fed and clothed, smiling contentedly. Behind him is a view of St. Pauls.