The Candidate for Barkshire £120.00
Back to products 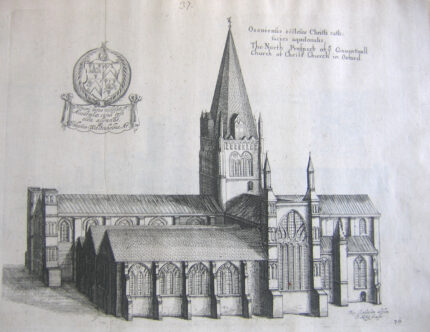 The North Prospect of ye Conuentuall Church of Christ Church in Oxford £80.00

This series of plates joins together to form a strip thirty feet in length, showing the splendid procession to their Coronation on April 23rd 1685 of King James II and Queen Mary of Modena. The procession is led by the ‘King’s Herb woman and her 6 maids’ strewing the route with sweet herbs and flowers. They are followed by musicians, officials, clerks, chaplains, Aldermen of the City of London, lawyers, Gentlemen of the Privy Chamber, judges, choirs, Westminster clergy, Privy Councillors, baronesses, bishops, viscountesses and viscounts, Heralds, countesses, earls, a marchioness, York Herald, 8 duchesses, a duke, great officers of State, archbishops, foreign Royalty, The Queen’s suite, The Queen and her waiting women, the Swords, Orb, Sceptres &c borne by the nobility, the Earl Marshal, the Crown borne by Duke of Ormond, the King’s suite and the King, Gentlemen of the Bedchamber and finally the Yeomen of the Guard.