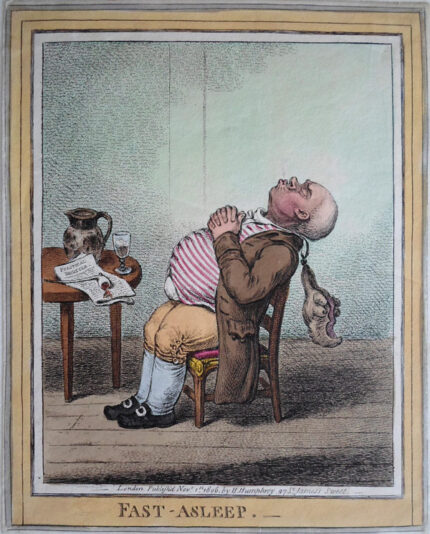 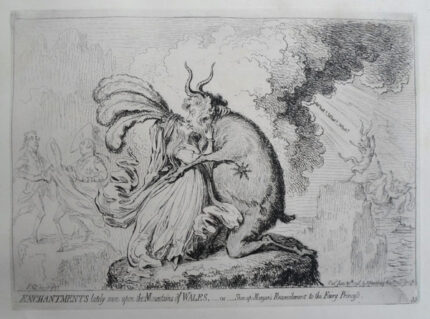 Fox runs hurriedly from the House of Commons through an arched doorway; he excretes as he runs, saying, "I never said he had a right to the Regency I didn’t indeed! indeed I didn’t!" In a porter’s chair (right) sits an elderly man (Cornwall, the Speaker), his hands raised, saying with a shocked expression, "Lord! Lord! What will this House come to?" On the left stands Weltje, very stiff and tall, his hands raised, saying, "No right to de Regency? den by Got! we shall loose all de Sausages!" He wears a looped-up apron; sauce-ladles are thrust through his apron-string. Through the archway appear, obliquely, the Opposition benches; they are crowded with members (also excreting) whose faces and gestures express consternation. In front sit North, with his eyes bandaged, indicating his Brisk-Cathartic. blindness, Sheridan, and Burke. Facing them, the profile of Pitt is seen through the doorway, saying, ‘"The Prince of Wales lias no more right to a "succession to the Regency, than any other Subject*, and whoever asserts the "contrary, speaks little less than Treason! – I repeat, than Treason!"