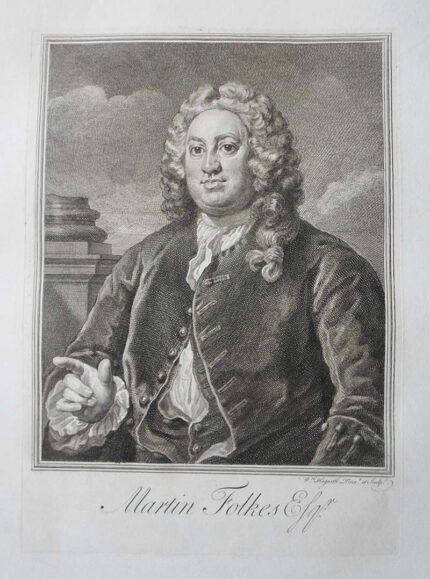 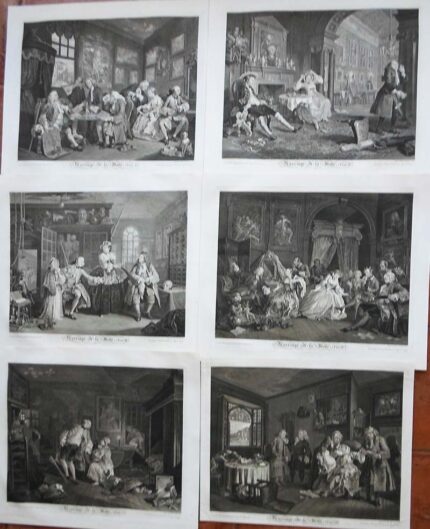 Hogarth’s most famous and densely composed theatrical satire, showing a company of touring players dressing and rehearsing their parts in Devil to Pay in Heaven in a tumbledown barn. Walpole’s infamous bill (intended to suppress dissident playwrights) closing all provincial theatre and also including all the London theatres except Lincolns Inn Fields and Drury Lane became law on June 21st 1737. From the playbills on the truckle bed in the foreground of this print it is evident that this is a provincial company about to put on its last performance. The central figure is a scantily clad actress in her underclothes and a headdress signifying that she is playing Diana the Huntress, rehearsing her dance steps. Behind her to the right two small imps quaff an enormous tankard of ale, a toothless old woman docks a squealing cat, and on the far right a negro maid sews up the hole in the stockings of an actress rehearsing her lines. In the foreground a small monkey pees into a roman helmet and kittens play with royal regalia and a small harp. On the left a man climbs up a rickety ladder to check how his socks are drying over the mantelshelf, a female actress playing Ganymede stands without her breeches, drinking gin to help with the pain of toothache, and a very small Zeus’s eagle spoon feeds a squalling baby using a paper inscribed Act Against Strolling Players which sits on top of a Royal Crown as a coaster under the baby’s food (thus neatly expressing Hogarth’s contempt for the Act). An actress in a hoop but no overskirt waxes her hair with a candle and on the left a stage set of a portico wreathed in roses stands propped against the wall. Further props and hampers are littered about the floor and a washing line, a large flag and two small griffins hang from the rafters. Paulson 150 IV/IV.