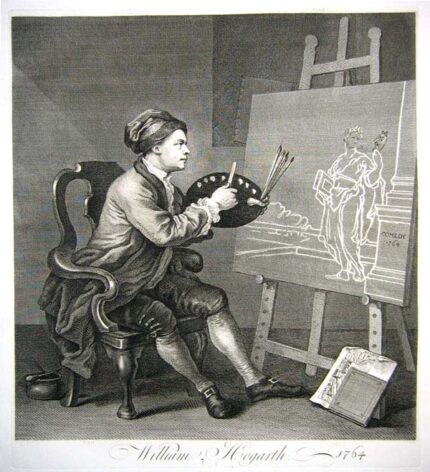 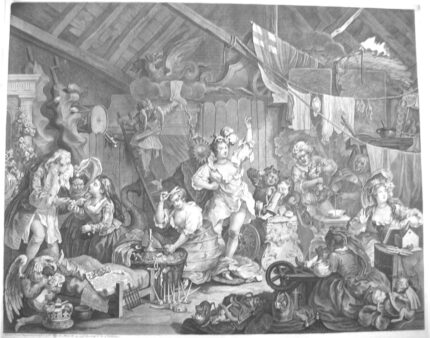 A. Fogg after William Hogarth and Sir James Thornhill

A large, detailed, crowded engraving of the members of Sir Robert Walpole’s administration (1721-42), clustered around the Speaker Arthur Onslow, enthroned on his elaborately carved chair, in the debating chamber of the old House of Commons (the Chapel of St. Stephen’s). On the left is the stout, bewigged figure of the Prime Minister (1676-1745), standing chatting to the Speaker, with his hands in his pockets, this is a flattering portrait, painted by Thornhill. On the Speaker’s left are seated Walpole’s staunchest supporters, this time, with the portrait of the Speaker himself, painted by Hogarth. Sydney Godolphin, Father of the House; next to him is Sir Joseph Jekyll, barrister and M.P. for Reigate; Colonel George Onslow, nephew of the Speaker and M.P. for Guildford and lastly Hogarth’s father in law the painter Sir James Thornhill. In front of the Speaker is Edward Stables, the Clerk of the House of Commons, and Mr Askew his chief assistant