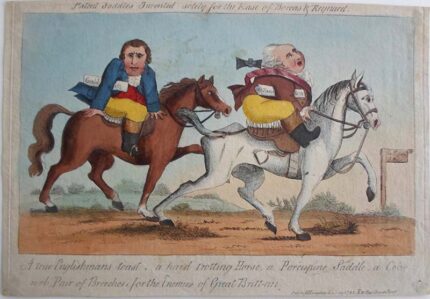 Patent saddles invented solely for the ease of Boreas and Reynard £250.00
Back to products 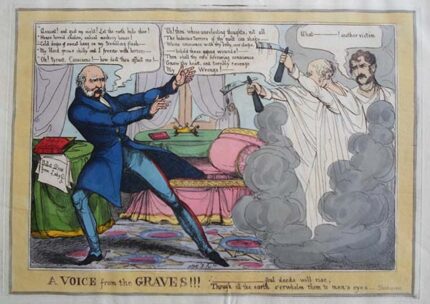 Lord Eldon wheels off the Pope in a wheelbarrow from the door of the House of Lords (left) where Liverpool stands, a spade in his hand, his head (in profile) and arm only being visible. The Pope, wearing a short white and gold garment with knee-breeches and crimson stockings, lies on his back, kicking and holding up his tiara, gaping in senile dismay; he has kicked off one (crimson) shoe. Beside him (right) walks Burdett, his hands clasped, writhing in anguished concern. Eldon wears a top-hat with a large orange favour inscribed No Popery on his judge’s wig; he smokes a short pipe with an air of determination; his long gown (not his Chancellor’s robe) is kilted up.

Be the first to review “A Forcible Ejectment.” Cancel reply