A coach-and-four symbolizing the magazine is driven right to left at a gallop, the horses trampling on a women with snakey locks, symbolising Vice, who has dropped her sword. The driver, dressed as a fashi9onable amateur whip, flicks his heavy lash over a departing gaggle of geese representing Folly; the lash encircles the neck of one, another dives into a pond. Three asses draw back in alarm at the sight of the coach. The four spirited horses are lit by rays from a sun inscribed New Era. The rays impinge on heavy clouds to left and right. On the left is an incantation scene, three witches over a cauldron, with nude men and winged creatures in the air. They are miscreants trying to provoke dischord and ‘eclipse the glories of Britain’. On the right thunderbolts strike a group of gibets on a hill from which hang corpses. The remains of those previously pilloried in the ‘Satarist’. In the foreground on the right a snake emerges from flowers to hiss at the coach. In the coach is a pleasant group, John Bull and his family: a man facing the horses, a lady opposite him, and two children looking from the window. The words The¦Satarist¦New Series¦no 1 on the door are bordered by pens and surmounted by a jester’d head, birch road and scourge; also the letters SNS and crossed pens, encircled by a laural wreath and by a snake. The guard sits behind blowing the horn.
This print symbolized the Satarist under new management, the driver is presumably the new Editor William Jerdan.
BM11894 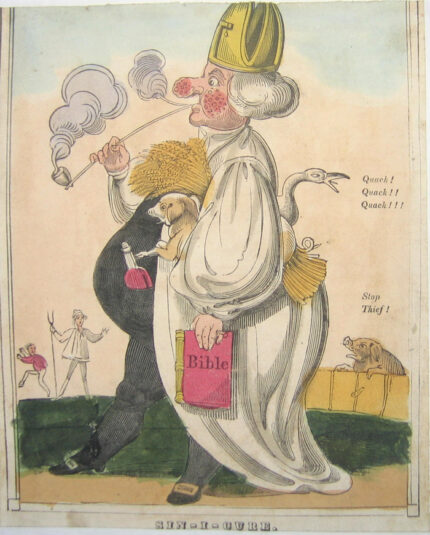