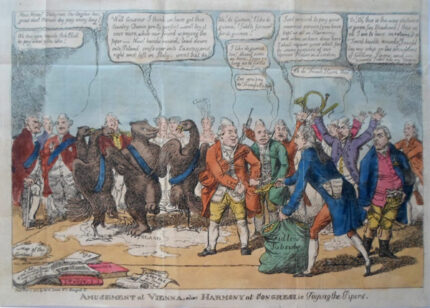 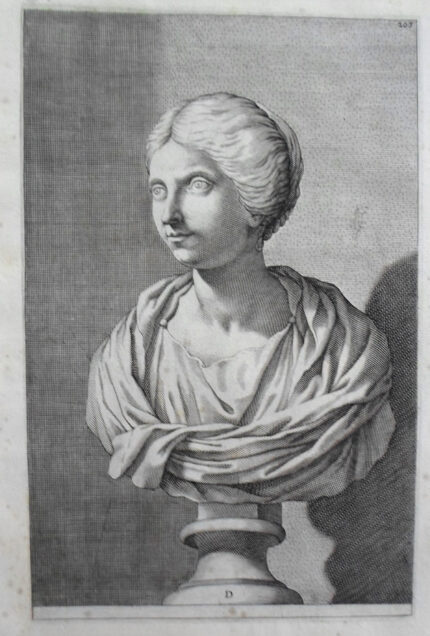 A satire on the management of the new theatre, the scene being the stage framed by two tiers of stage-boxes. In the centre is a huge wooden tub, ‘New Drury Brewing Vat’, supported on the backs of two men on hands and knees. One (left) rests his hand on a paper: ‘Arnolds Swiss Banditti’, showing he is Samuel James Arnold; the other similarly displays ‘Raymonds Life of Dermody’, showing he is James Grant Raymond. Whitbread stands on a ladder stirring the frothing contents of the vat with an oar-shaped implement, and throwing in papers: ‘Expectations’, ‘Subscriptions’, ‘Promises’ [twice]. Clouds rise from the vat and reach Apollo, who floats in front of the centre of the festooned curtain, with irradiated head and holding his lyre. He wears draperies above breeches and spurred top-boots, and flees from the fumes of the vat. At the bottom of the vat (right) is a tap beneath which stands a bucket inscribed ‘For Profits’. John Bull (not named) sits on the ground, disconsolately watching the tap, from which nothing flows; he says: "Profits!!!! D—me if any will come." The reason for this is that Sheridan, supported on the back of his son Tom, intercepts them. Both use gimlets to puncture the cask; Sheridan holds a tankard to collect the frothing liquor, inscribed ‘4000 Pr Anm’ from his hole; the other catches ‘1000 Pr Anm’ in his mouth. In the foreground on the right are two couples. The stout and elderly Duke of Norfolk, wearing a star, dressed as Hamlet with his arm round the shoulders of a plain and middle-aged actress who holds a playbill: ‘Hamlet the Du[ke] of Norfolk Ophelia Miss Tidswell’. He says: "Oh! that this too, too solid flesh would melt!" She answers (misquoting ‘Richard III’): "Jocky of Norfolk be not so bold." Beside them (right) a tall thin actor (Elliston) addresses a stout lady on whose posterior is a playbill: ‘The Wonder Don Felix Mr Elliston Isabella [i.e. Albinia] Countess of Buck’. She has whiskers, and is addressed by Elliston (adapting, not Mrs. Centlivre’s play, but ‘The Critic’): "O! Whiskeranda Whiskeranda O." Behind Miss Tidswell Lord Holland, a star on his coat, stands on a pile of ‘Rejected Addresses’, with others tucked under his left arm, and in his left hand a paper: ‘Lord B—s Add[ress]’. Above his head a notice is pinned to a column: ‘A Map of Holland’. He turns to a thin man with a deformed right leg, saying, "Well! well! you voted with us B. the prize shall be Yours"; Byron is capering in dismay at a heavy battering-ram, inscribed ‘Monologue’, which strikes his posterior, the point of contact being an ass’s head with wings for ears. He exclaims: "Stop! good Doctor! one Murder is enough I do not wish to suffer the same fate with Lucretius." Two men hold the ram, one (Busby) is elderly; his son, behind him, is ineffectively foppish, and says: "Let us cram it down John Bulls Throat Father." On the extreme left, a pendant to the group of Norfolk and Elliston, is a throne-like settee with an ornate canopy. On this are seated a tall emaciated old man and a youngish woman with much-exposed breasts, who holds a melon to which she points with an imperative gesture. From the man’s pocket hangs a paper: ‘Mellon payable at Coutts’, showing that they are Coutts and Harriet Mellon. In front of them, grinning and posturing, stands Skeflington, pointing at the lady, and displaying to Coutts a paper inscribed ‘The Vertious Cortezan or generous Cut Throat MS’. At his feet is a paper, ‘The Sleeping Beauty’, his most popular play, see No. 10455. Near them, a pendant to Lord Holland and Byron, stands a man in flamboyant military uniform, a pen behind his ear, with his arm round a young woman, evidently Mary Orger. He holds a paper inscribed ‘Highgate Tunnel’ [showing that he is Lascelles Smith, whose after-piece of that name was played 2 July 1812 by the Drury Lane company], and tramples on another inscribed ‘Rejected Addresses’. Behind them shuffles a disconsolate man holding a pair of pattens in one hand, and a book, ‘Orgers Ovid’, in the other; under his arm is an umbrella. He exclaims: "Oh! my Vife my Vife." The pair are playing the parts of Major Sturgeon and Mrs. Sneak (with Orger as Jerry Sneak, the henpecked husband) in Foote’s ‘Mayor of Garratt’. Behind him are two casks inscribed respectively ‘Fixture Dimond Small Beer’ and ‘Fixture Lewis’s Gun Powder’. At the back of the stage (left) is a high platform, on which is a tall post supporting a notice headed ‘New Regulations’; these are numbered from ‘1’ to ‘6’ and signed ‘H. Combe.’ Combe himself, wearing his alderman’s gown and chain, stands at the foot of the post, kicking off the platform bottles inscribed ‘Choice Spirits’; he says: "What have these to do here?" He holds a tray of candles and candle-ends, which he is distributing to a group of actors of the barnstorming type: a short shambling man in Roman armour, a tall lean and elderly actor, a fat woman wearing a spiky crown, a man in Turkish costume, and an ugly dwarfish infant in Highland dress, reminiscent of the Roscius era, see No. 10318, &c. They eagerly hold out their hands for the candles (part of their meagre pay). Combe is said to have issued ‘New Regulations’ and hired provincial actors. On the opposite side of the stage is a high cliff on which is a tomb topped by an urn and emblems of Tragedy and Comedy; the inscription: ‘Hic Jacet Georgius Cook—Heu Heu Heu’. A woman, ‘the genius of the drama’, weeps for the death of her favourite.