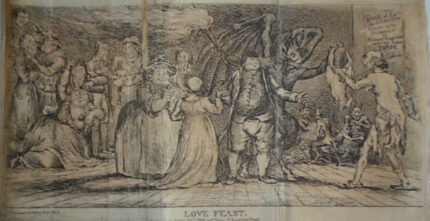 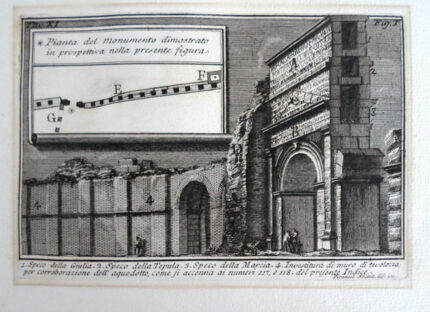 Repairs to old folds and margin

Members of the Opposition in the guise of candles, lamps, &c. They are (l. to r.): (1) A kitchen candle in a candlestick with the head of Lord Kinnaird (because he tried to get evidence against Melville from his cook, see BMSat 10421). (2) Tne nead of Grey, ‘a firebrand’, in profile to the right., surrounded by flames, as the apex of a torch. (3) A veiled woman holds the head of Erskine by the ears; flames issue from the head. He is ‘the lamp of a vestal, which, being once put out can never be put in again’. (4) A street lamp on an iron standard is filled by the head of Whitbread (a parish lamp, because Whitbread is an advocate for general education). (5) A rush-light with the head of Petty, because he was "never ‘very bright". (6) Sheridan’s head supported on a globe emits rays, forming the brightest part of the design (it is ‘lit by spirits of wine’). But Time holding a scythe is about to cover it with an extinguisher. (7) A dark-lantern is surmounted by the insignificant head of Ponsonby, who "consented to ‘enlighten’ the House of Commons as a Dark lanthorn". (8) The Duke of Norfolk’s head rises from a tub of tallow with several lighted wicks. (9) Windham’s face is set in a panel with flame (gas) issuing from the mouth ("delighting in novelty" he is one of the "’instantaneous light’ machines", emitting only ‘inflammable air’; see BMSat 11092, &c). (10) Temple’s head surmounts a very thick candle which, though surrounded by much paper where inserted in the candlestick, is collapsing backwards (in the candle is ‘a thief’, see BMSat 10721, &c.). (11) Burdett, a thin naked figure holding a bonnet rouge and a lantern inscribed ‘Horne’ [see BMSat 10731, 10976], "can only ‘glimmer’ as an ‘ignis fatuus’". (12) Grenville is slung from the roof by chains to the head and feet, the flame issuing from his mouth; a cross hangs above him. He is ‘a Roman lamp’ (cf. BMSat 10404, &c.). The rest of the Opposition "will be transformed into ‘simple tapers’". BM 11056