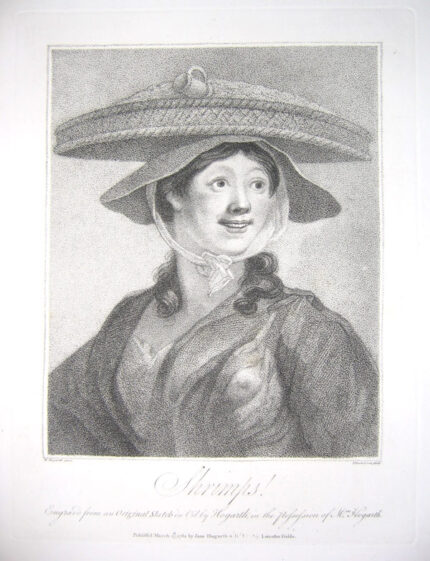 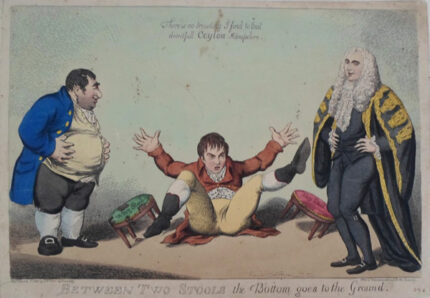 Pl. to the ‘Anti-Jacobin Review’, iii. 99. Fox, asleep in a half-tester bed, is beset by the phantoms of his dream. A fiery horse, ridden by a sansculotte, lies on his chest, kicking a hind hoof in his mouth. The rider plants on Fox’s breast the staff of a flag inscribed ‘Vive la Liberté’ on which a heart (on an inverted crown) is transfixed by a dagger. The foot of the low bedstead has collapsed and the whole bed slides downwards on a tilted floor. A fierce creature (Bonaparte), almost naked except for cocked hat, jack-boots, and enormous sabre, wrenches at the fingers of Fox’s out-thrown left hand. A demon with webbed wings, naked except for an arsenal of daggers and a bonnet-rouge, clings to the top of the tester, and clutches at the bed-coverings which he has dragged from Fox. Under Fox’s pillow is a dagger, a winged dagger flies towards him from the window. By the foot of the bed (left) are Fox’s boots and coat, from the pocket projects ‘Godwins Political Justice’. A chamber-pot is inscribed ‘Le Paux’ (see BMSat 9240). On the floor, with a single die, are pamphlets and papers: ‘Ancient Republics’, the words facing a black man standing on his head; ‘[Wa]kefield Answer’; ‘Morn[ing Chronicle]’ BM 9371