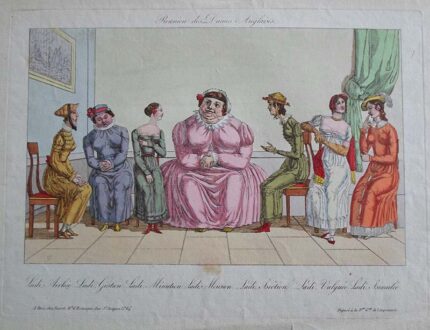 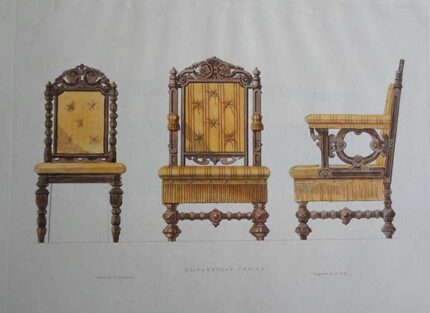 An evening scene in Vauxhall Gardens. On the extreme left is the orchestra with the organ behind and performers on the kettledrums, string and wind instruments. The vocalist, Mrs. Weichsel, sings, in profile to the right, from the adjacent (and slightly lower) balcony, just above the heads of the crowd. A violinist and another musician are seated behind her. In the supper box beneath the orchestra is Dr. Johnson seated full-face, between Boswell and Goldsmith (d. 1774), who face each other in profile, both caricatured; of two stout women one is reputed to be Mrs. Thrale.
Many groups fill the foreground and middle distance. The two centre figures are the Duchess of Devonshire and Lady Duncannon arm in arm. A naval officer with a wooden leg and a patch over one eye is reputed to be Admiral Paisley (? Admiral Pasley, 1734-1808). Major Topham, an excellent portrait, stands (left) in profile to the right staring through an eyeglass. Between Topham and the supper-box are two men, one of whom is identified as Lord Camelford.[In the reproduction in Angelo’s ‘Reminiscences’; to whom the name refers is not clear] An elderly parson, [He closely resembles the parson of BMSat 7059 who is probably William Jackson of the ‘Morning Post’] reputed to be Bate Dudley but not resembling him, gazes at the Duchess from behind a tree. Next him a man dressed as an officer in a Highland regiment with kilt and broadsword is supposed to be James Perry, editor of the ‘Morning Chronicle’. On the right the Prince of Wales, conspicuous by his star, whispers to Mrs. Robinson (Perdita), though their liaison was ended. Her right arm is linked with an ugly and elderly little man, probably Robinson. On the extreme left an elderly couple advance arm in arm in profile.
Behind the Prince is a group standing on a small platform (or tables), showing half length above the crowd. In the foreground (right) is a supper-table under trees where two cits entertain two courtesans. Lamp-lit trees and the covered way form a background on the right.

Be the first to review “Vaux-Hall” Cancel reply