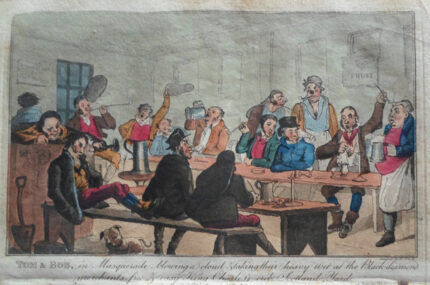 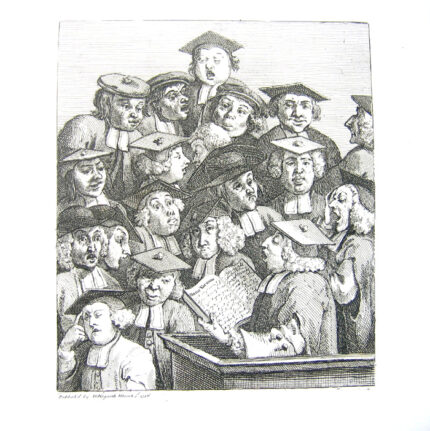 1. The Marriage Contract.
The scene is the salon of impoverished, gouty, old Earl Squander, who sits under a throne like canopy, wearing an elaborately embroidered velvet coat, holding out his ‘collateral’, his family tree showing his descent from William the Conqueror. On the other side of the table sits the father of the bride, an elderly, stout, city merchant who earnestl;y peruses the marriage contract through his lorgnette. On the right sit the betrothed young couple. They obviously already dislike each other as they sit back to back on a small sofa. Viscount Squanderfield sits admiring his reflection in the mirror, while his bride disconsolately pulls her scarf through a wedding ring (symbolising her captivity), while being soothed by her future lover, the lawyer Silvertongue. Outside the window, one of the causes of the Earl’s poverty is clearly visible, he has been building a grand new house (in the manner of Burlington), which is unfinished and covered with scaffolding. Paulson 158.

2. Early in the Morning.
The consequences of such a disastrous marriage are already apparent in this plate. The newlyweds live their lives quite separately and have nothing in common. The Viscount has evidently just returned from a night’s debauch. He sprawls in his chair, legs outthrust, with what may be a used condom protruding from his pocket, which is being sniffed by a small poodle. Across the breakfast table his young wife stretches langorously, she has evidently already found consolation elsewhere. A chair is upturned and their steward, clutching a handful of unpaid bills, throws up his hands in despair. Paulson 159.

3. Consultation with a Quack Doctor.
The interior of the surgery of the eminent quack doctor and specialist in venereal disease Dr. Jean Misaubin. On the right stands Dr. Misaubin, diligently polishing his eyeglasses with his handkerchief, flanked by his huge, ugly Irish wife. The seated Viscount has brought his child mistress for a consultation, significantly a small pillbox sits on the chair between his legs. Around the doomed aristocrat and the sick child the dingy room is full of horrors and medical curiosities. A syphilitic skull rests on the table, in the cupboard is a skeleton and a pair of mummies, strange instruments and specimens hang on the walls. Paulson 160.

4. The Countess’s Levee.
The old Earl has died and his son has inherited. The scene is the young Countess’s crowded, lavishly decorated bedroom. She sits before her dressing table, while her hair is arranged by a hook nosed French barber, talking to her lover, the lawyer Silvertongue, who lounges full length on the sofa. Behind her sits a pair of gossiping dandies talking to a young matron, while a fat Italian castrato sings to the music of a flute. On the floor a small black page plays with a basket of figurines, while another hands round a pot of chocolate. Paulson 161.

5. The Duel.
Silvertongue and the Countess have been surprised by the Earl, while making love at the Turk’s Head Bagnio. Silvertongue has killed the Earl in the ensuing duel and is escaping through the window in his night shirt, while the dying Earl crumples against a table and the innkeeper and watch burst in through the door. The young wife kneels barefoot on the floor, clasping her hands in penitence. Paulson 162.

6. The Death of the Countess.
In the first plate the scene was the old Earl’s mansion in the fashionable West End, but now in the last, the scene has shifted to the City residence of the bride’s money grubbing, arriviste, old merchant father. London bridge is visible through the window and the City arms are engraved on the window glass. After the murder of her husband and the subsequent hanging of her lover Silvertongue (a broadsheet with his last dying speech lies on the floor), the Countess has committed suicide by overdosing on laudanum. Her deformed (syphilitic) child (a girl, so the Squander line comes to an end despite the parents’ scheming) is held up by her nurse to kiss her dying mother , a doctor shakes the dimwitted servant who procured the poison, and her father draws her rings off her stiffening fingers. Paulson 163.