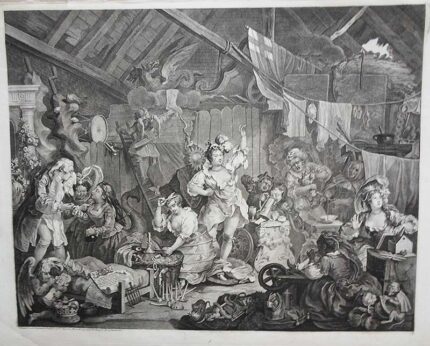 Strolling Actresses Dressing in a Barn £900.00
Back to products 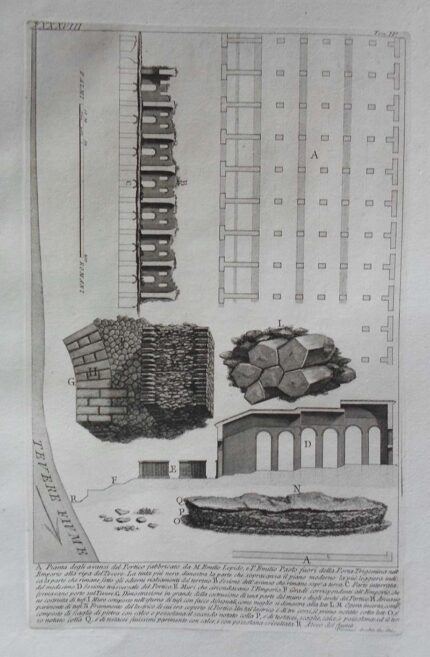 One of Hogarth’s most complex engravings. Southwark Fair was held annually in September, centred on Borough High St, Southwark. Beginning as a three day market, it soon spread to fourteen days and became a place of amusement, increasingly notorious for vice, crime and riot, until in 1762 the fair was suppressed by the Court of Common Council. The scene shows a crowded square, surrounded by various theatrical booths hung with their decorative showcloths, with the tower (from which Thomas Kidman the ropeflyer or early bungee jumper has flung himself), of the old church of St.George the Martyr (demolished 1734) in the background. On the extreme right, the broken nosed figure of prizefighter James Figg sits astride his horse waving a cutlass menacingly, while two men peer avidly into a peepshow. In the background two plays are being performed The Siege of Troy and Punches Opera, the slack rope dancer Signora Violante swings on her rope hung between two booths and on the right the rickety stage containing the performance of The Fall of Bajazet collapses (appropriately) on top of a crockery stall, a woman operating the ‘Find the Lady’ card fraud, a performing poodle and a dwarfish bagpipe player. In the centre, amongst the melée, a pretty young woman beats a large drum, accompanied by a black trumpet player and gawped at by a pickpocket and his accomplice, an actor dressed as Julius Caesar is accosted by two bullies, Mother Needham shows off Moll Hackabout (Hogarth’s Harlot, see above) to a prospective customer and a conjuror waves a dove in the air triumphantly. Paulson 131 only state.

Be the first to review “Southwark Fair” Cancel reply