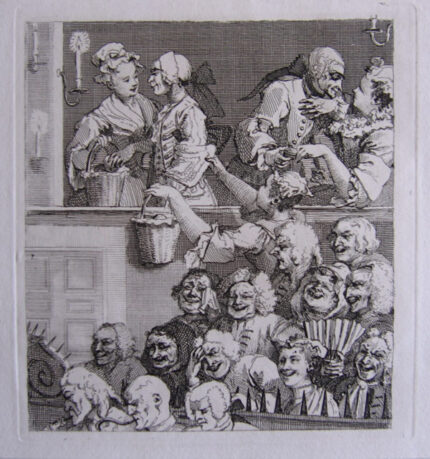 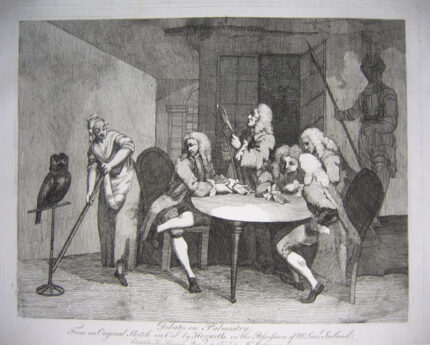 Hogarth’s satire on the customs and manners of High Society. The painting was commissioned by the hugely wealthy and eccentric (her patronage of Hogarth was considered very eccentric) heiress Mary Edwards of Kensington (1704-43). She commissioned Hogarth to paint a satire on contemporary fashions of dress and furnishings, perhaps because she wished to retaliate against those who had ridiculed her old fashioned, countrified taste. She paid 60gns for this painting and also desired Hogarth to execute an engraving after the painting. However, for unknown reasons he refused, and also greatly annoyed Miss Edwards by refusing permission for the painting to be engraved by others, although at least one pirated example was published during his lifetime. Thus this engraving was commissioned by Boydell after the Hogarth copyrights ran out. In 1728 Mary inherited from her father Francis Edwards of Welham, an enormous fortune completely unencumbered and at her own disposal. At the age of twenty-four she was said to enjoy an annual income of between £50,000 – £100,00, with extensive properties. She became a magnet for fortune hunters and predictably enough fell in love with a handsome, profligate, young Scottish nobleman called Lord Anne Hamilton (after his godmother Queen Anne). They had a hasty Fleet marriage in 1731 and in March 1732 their son Gerard Anne was born. The marriage quickly proved to be catastrophic, Lord Anne was soon running through his wife’s fortune like water. However, Mary Edwards proved to be both brave and resourceful and was determined to save her fortune for herself and her son. The Fleet marriage had not been officially registered and there was no contract, so Mary simply bribed the Fleet chaplains to erase all references to the marriage in their records and placed a notice in th register of the church of St. Mary Abbots, Kensington (where she was a benefactor) declaring herself a single woman and thus making her child a bastard. On May 22nd 1734 Lord Anne accepted his dismissal and signed a deed returning all Miss Edwards property to her and relinquishing all claims on her. Having recovered her property she successfully carried on her own financial affairs, soon repairing the ravages that her ‘husband’ had caused. She died on August 23rd 1743 aged only thirty eight years old, leaving her huge fortune to her son. Miss Edwards is depicted here wearing a hugely exaggerated, flowered muslin gown, is shown gossiping confidentially with an elderly, skinny beau, identified as the second Earl of Portmore. He wears elaborate French style dress and carries a huge muff and walking cane. On the left a pretty young woman caresses a small, black pageboy who wears a feathered turban, said to be a portrait of Ignatius Sancho who was later painted by Gainsborough. On the floor is a pile of dominoes and in the foreground a monkey wearing a tricorne hat and coat, reads a menu through a lorgnette. The pictures on the wall add their usual comment, all depict the frivolities of fashionable life. (See Hogarth: High Art and Low, 1732-1750 by Ronald Paulson)