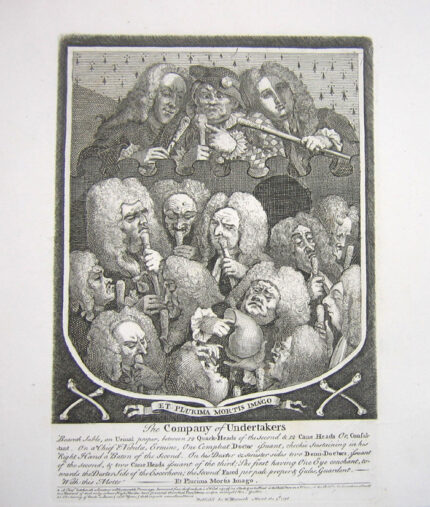 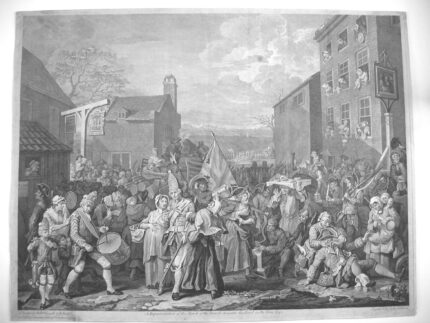 Hogarth had originally engraved the Hudibras plates for Philip Overton and John Cooper in February 1725-6, and they passed to Robert Sayer, Overton’s successor, with Hogarth’s other early plates. In the mid nineteenth century the copper plates were bought by Bernard Quaritch, they are now form part of the collection in Hogarth’s House, Chiswick. Samuel Butler first published Hudibras ‘the modern Don Quixote’ in 1662, but although the poem was hugely successful, he died in poverty and obscurity. 1. Frontispiece and its Explanation With portrait of Samuel Butler.. 2. Sr. Hudibras his passing Worth, The Manner how he sally’d forth. Hudibras and his servant Ralpho, riding their sorry nags along the highway. 3. Hudibras’s First Adventure. Hudibras confronts a crowd of peasants at a bear bailting. 4.Hudibras Catechiz’d. Hudibras is on the floor in a room being attacked by masked figures with sticks. 5. Hudibras vanquish’d by Trussa. Hudibras and Ralpho beaten by the gigantic figure of Crowdero’s girlfriend Trussa. 6. Hudibras in Tribulation. Hudibras and Ralpho sit in the stocks, mocked by his lady love. 7. Hudibras and the lawyer. Hudibras interviews a lawyer in his office. 8. Hudibras beats Sidrophel and his man Whacum. A scene in the magician’s study, with Hudibras’s horoscope lying on the table. 9. The Committee. The committee of the Rumps sits around a table debating their new laws 10. Hudibras Triumphant. Hudibras and Ralpho, conduct their prisoner Crowdero to the stocks. 11. Burning ye Rumps at Temple Barr. The populace burn huge rumps of meat at Temple Bar, to signify their contempt for the Rump Parliament that met after the death of Cromwell and before the Restoration of Charles II. 12. Hudibras encounters the Skimmington. Hudibras disgustedly surveys the Skimmington procession, that punished warring or adulterous couples