Click to enlarge
Home » Catalogue » The Cats let out of the Bag or the Rats in Dismay. 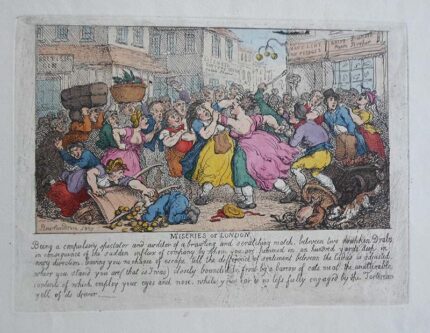 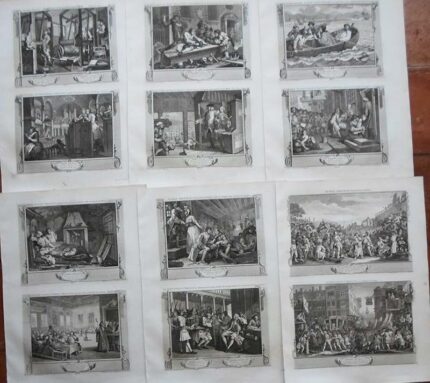 The Regent stands directed slightly to the left, his head irradiated, holding open a bag from which one cat has jumped and two others are ready to spring, causing rats to scamper off. Cats and rats have human heads. Eldon has pounced on Grey, while Liverpool and Perceval are still in the bag. Ten other rats scurry off to the left as does a tiny creature with the head of Lansdowne. Only Erskine. In Chancellor’s wig, Moira (in a cocked hat), Derby amd Whitbread, with a barrel of Whitbread Entire fixed to his tail, can be identified. One of the others says; Wigs shav’d for twopence. The three Grenvilles, to the right, scuttle off, Lord Grenville with a (Spe)ech on the Regency Bill 1789 issuing from his mouth, Buckingham in spectacles, and Temple carrying off a large bundle of Stationary &c. Two other rats, one resmbling Cobbett, are in a large rectangular trap inscribed Gibbs Patent Rat Trap; a bull-dog, John Bull, looks menacingly at him, a hind-leg contemptuously raised. Three rats run to the left from behind the trap; behind them is a gibbet from which hang three nooses; on this sits a demon, holding out to them a noose ,and saying , Reformers Stop here. They are Wardle between Burdett and Folkestone. A rat with the head of Sheridan struggles to the right from the back of the Prince’s bag. The Prince, a manly figure, says :

For Heaven doth know so shall the World

Perceive that I have turn’d away my former

Self, so will I, those that kept me company

Behind him is a shield, with his coronet and feathers, and the inscription: Spes columenque gentis. On it rests a scroll headed Filial Affection,  and the words We shall Wxxxe. Beside it lies a leek, emblem of Wales. On a cloud to the left reclines a partly draped woman extending a wreath to the Regent; she is lit by the rays from the Prince.

Be the first to review “The Cats let out of the Bag or the Rats in Dismay.” Cancel reply