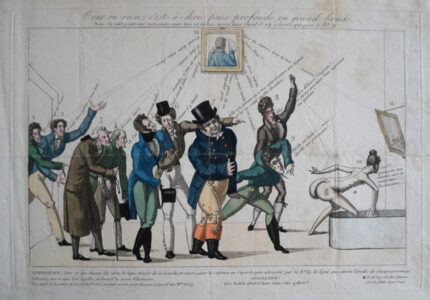 A wild affray between tailors, some mounted on asses or on miserable horses, the design being filled with a confused medley of figures, only one being a woman; she rides a donkey and flourishes a toy sword. The weapons and missiles show that the men are journeymen tailors; they are shears, cabbages, and flat-irons, with bludgeons, turnips, a broom, &c. There are three banners: on two are three frothing tankards, on one a pair of shears.