Click to enlarge
Home » Catalogue » The State Waggoner and John Bull.-or-The Waggon too much for the Donkeys!- 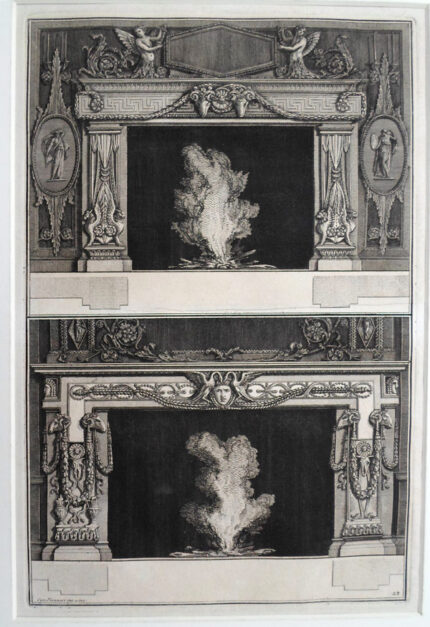 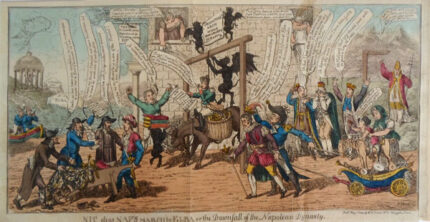 The State Waggoner and John Bull.-or-The Waggon too much for the Donkeys!-

The State Waggoner and John Bull.-or-The Waggon too much for the Donkeys!-

The title continues: ‘together with, a distant draw view of the New Coalition among Johnny’s Old Horses.’ A lumbering wagon drawn (l. to r.) by eight asses is stuck fast, up to the axles in water; the asses strain hard to drag it up a steep slope to dry land. Its dilapidated tilt is much patched and is labelled ‘British State Waggon 1804′. The wagoner, Addington (r.), kneels on an adjacent bank, and shouts to a fat and jovial John Bull, dressed as a volunteer, who stands on the opposite bank of the deeply sunken lane, his bulldog beside him. Addington wears a smock, but his powdered hair is in a black bag. He holds his long whip and his hat in his right. hand, and extends his left. arm, shouting, " – help, Johnny Bull! – help! – my Waggon’s stuck fast in the Slough! – help! help." John, who holds his bayoneted musket, looks down at Addington, pointing behind him with outflung r. arm at thirteen horses with human heads above and behind him on rising ground. He answers: " – stuck fast in the Slough! – ay to be sure! – why dost’nt put better Cattle to thy Wain? – look at them there Horses doing o’ nothing at all! – what ether they matches in Colour, if they do but drag the Waggon out o’ the Mud! – don’t ye see how the very thoughts o’ being put into Harness makes ’em all love and nubble one another?" The horses, [The identifications (most being self-evident) are those of Miss Banks, the alternatives in brackets being those of E. Hawkins. Wright and Evans arrange them differently and omit Spencer and Lansdowne.] though close together, are in groups. On the extreme left., and rather behind the others, Lord Spencer (or Carlisle) rubs noses with Carlisle (or Lauderdale), Erskine (in wig and bands) with Wilberforce. In front of this group the bulky Lansdowne (or Norfolk) lies on the ground, asleep, his back to the others. Next, Grey turns his head towards the haughty Buckingham, who wears spectacles and a Garter ribbon. Their backs are turned to the main group of four: Fox, with a foreleg placed on Grenville’s shoulder looks up affectionately at the latter, who responds with a complacent smile. Pitt watches the pair with haughty benignity; Canning, behind, watches them intently. On the extreme right. Sheridan (a plump piebald), scowling fiercely, kicks up his heels at Windham, who retorts with a blast of excrement, his head turned towards Fox and Grenville. In the foreground (l.) is the stage-wagon (the slowest form of transit), drawn by its eight undifferentiated asses. The tilt is open at the back, showing it crammed with bundles, &c. The centre-piece is a bulging sack: ‘Budget for 1804’, from which project papers inscribed ‘Taxes’. A treasure-chest is inscribed ‘Treasury’; coins pour from a hole in its side. It is flanked by two bundles: ‘Secret Service Money’ and ‘Family Pickings’. A bundle of ‘Pensions’ consists of bulky papers inscribed ‘Sinecure’. Large volumes tied together are ‘New Acts of Parliament’. Other papers are ‘Defence against Invasion’; ‘State of Ireland’; ‘East Indies’. A bundle of ‘Loans for / 84’ [sic] contains ‘Navy Bills’ and ‘Exchequer Bills’. There are also three tiny barrels of ‘Gun Powder’ and a bundle of muskets inscribed ‘Volunteers’. From the side of the wagon hangs a basket of ‘Family Medicine’ containing two bottles labelled ‘Broth[er] Bra[gge]’ and ‘Brother Hiley’. BM 10232