Click to enlarge
Home » Catalogue » Staggering – Bobs, a Tale for Scotchmen, – or- Munchausen driving his Calves to Market 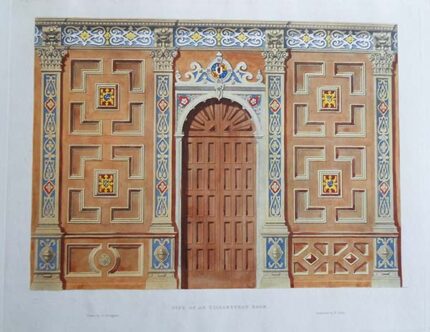 Side of an Elizabethan Room £120.00
Back to products 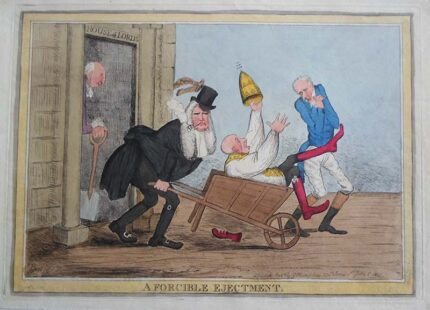 Tear /crease from top to bottom in the centre of the image, neatly repaired.

Tear /crease from top to bottom in the centre of the image, neatly repaired.

George Hanger bestrides a pile of calves with which his pony is laden, high above his mount’s head. He sits in profile to the left, carrying a bludgeon; his right leg thrust forward over the calves. The fore-feet and hind-feet of the calves are tied and lie across the pony and each other. Eleven heads are visible. Hanger says: “Here they are my Lord, here’s the slunk Calves, by Gxx – no allusion, dxm’me! – almost forgot you was a North-Countrey-Man! – Runt carries weight well! – no less than Thirteen damme! – come push about the Bottle, & I’ll tell you the Story; – In Scotland they eat no Veal, by Gxx! nothing but Staggering-Bobs, – by Gxx! – on my Honor & Soul I mean no insult! – but Tattersal he swore, d——n me, if he didn’t, – that on a small Scotch Runt, he saw, Gxx dxxn my blood, – how many d’ye think he saw? – ( – “Saw what, Georgey? – ) – why Calves! – Staggering-Bobs to-be-sure! – why d’ye think he saw Seventeen? – no! – but dxxme, by Gxx, he saw Thirteen!!! – & all just upon such another little Cock-Horse as my own!!!’ Beneath the title: ‘This Print is dedicated to Lord Exxxl [Errol, see BMSat 9024], his Party, & the Frequenters of Steevens’s in general.’ (Stevens’s was a famous coffee-house in Bond Street, cf. BMSat 9067.

Be the first to review “Staggering – Bobs, a Tale for Scotchmen, – or- Munchausen driving his Calves to Market” Cancel reply